Home » Travel » Chintu Travels: Day 7. The Dunes, The Living fort, and Being Alone.

Chintu Travels: Day 7. The Dunes, The Living fort, and Being Alone.

Me and Ashik took a late night train to Jaisalmer, I had a reservation and he took a general ticket hoping to get it confirmed in the train, he did get a seat after there was a no show for one of the seats.

I was woken up early in the morning by some guy who confused me for his friend, I had to thank him, I was to tired to get up on my own and I had forgotten to set up an alarm, Jaisalmer was the first place where I had no pre-booked accommodation, Ashik had an accommodation at a place but it was just a tent, and in the shivering cold, we didn't want to stay in a tent.  A TukTuk guy gave me his card on the railway station and said if we needed any help in touring Jaisalmer, we can call him, cold and tired by an overnight train journey we did, he came and picked us up in his TukTuk and took us to his hotel. Before we could keep our bags down, he started talking about packages, he initially gave us a deal for 3500 per head and, which included the evening desert safari to Sam sand dunes, dinner, and night stay in the desert, and breakfast.We weren't planning to stay the night in Jaisalmer so we bargained hard with him, or final package was 1250 per head which started by rushing 40 kilometers to  the starting point of the dunes to catch the sunrise in a Jeep, camel ride for approx 6 kilometers in total and site-seeing of entire Jaisalmer, which at that point I thought was pretty expensive but now I feel was worth the price.

After a good 30 minute ride on the road with desert on both sides we reached Sam Sand Dunes, the place is known for it's clear sandy dunes, I clicked some cliched photos of the rising sun, while our driver went to arrange a camel for us, Ashik had bought gloves in Jodhpur and I didn't, I regretted not doing so, my hands were freezing, I had cuts on my knuckles because I was repeatedly sliding my hands out of my Jeans pockets. I sat on the back of the camel, it was a bit scary when the beast stood up, on the top of the dunes, I met a tea seller, and if you're reading this on my blog, you know about my special bond with chai wallas, he was still a student in high school in the nearby village of Sam after which the dunes were named, selling tea on the dunes was a good business especially during sunset and sunrise, at 15 rupees per cup his tea wasn't the cheapest or the best I've ever had, but the feeling of holding something warm in my freezing hands was worth the money, he noticed my camera and started enquiring about the specification of the camera, after his enquiry he told me that was a hobbyist photographer too, he had saved a lot of money and bought a camera for approx 12,000 rupees, but it was ruined when it fell on the sand, the sand got inside the camera and professional cleaning cost him approx 2000 rupees, since then he has stopped bringing his camera to the dunes, I suggested him to invest in a cheap neck strap, and to be more careful, I clicked some photos of him and the camel to get the desert look, and then we headed back to the camp where our jeep was parked. 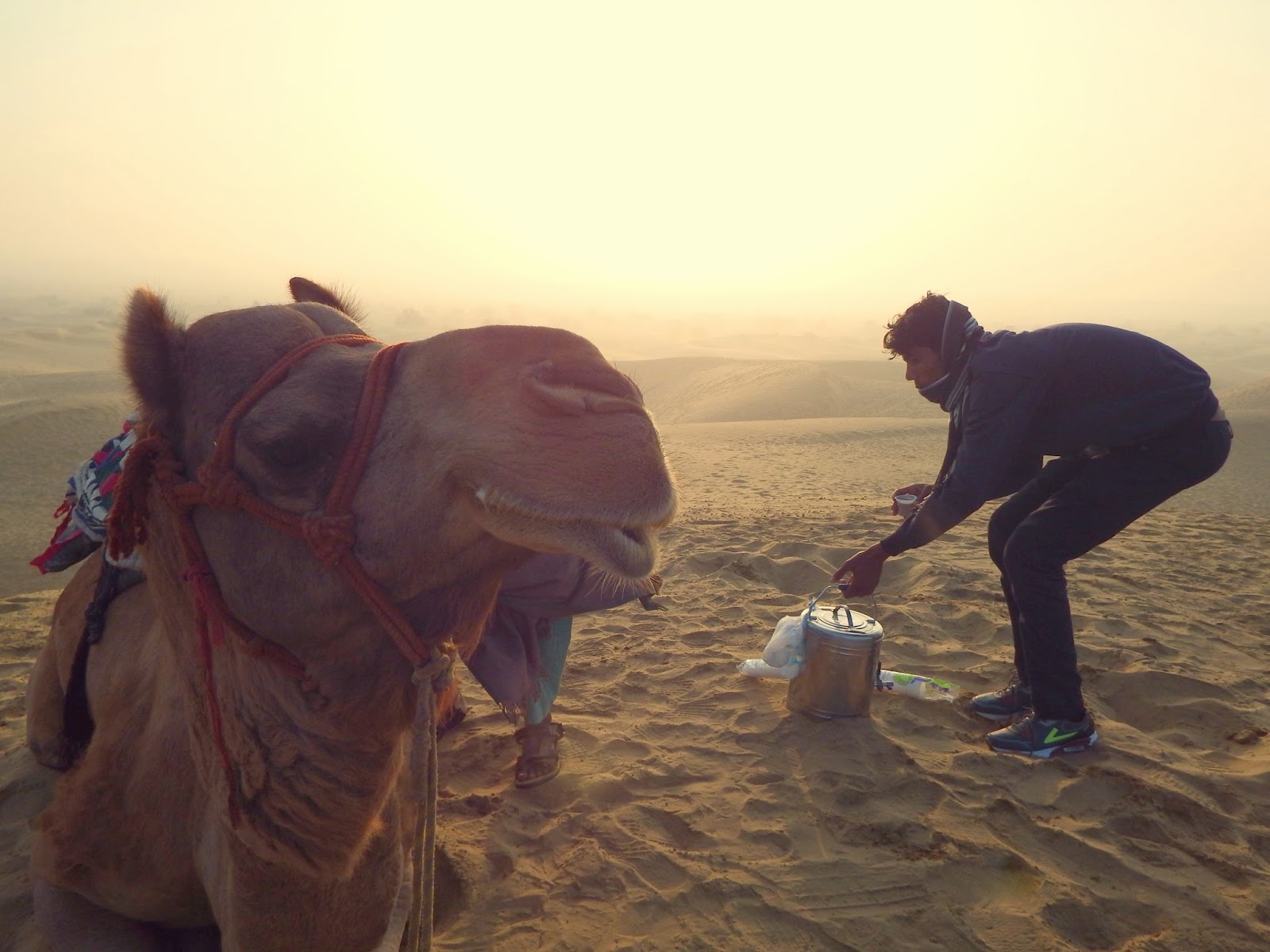 Jaisalmer is famous for it's Golden Fort, popularly called Sonar Kella after the story and movie of same name based on his Signature creation, Feluda aka Pradosh Mitter, the Bong Sherlock  Holmes. The Golden Fort in the movie was shot in this fort. The name got stuck, you can still see a lot of tourist offices calling it  Sonar Kella ,after travelling through the traditional havelis, our auto driver dropped us on the gate of the fort. As expected you can see people leading normal lives in the fort, though most of them have converted their houses to restaurants, souvenir shops, and hotels to give the view of the ancient Marwari lifestyle, and it makes sense to, with the fort being flocked by tourists all around the year, why do something else when money itself is walking up to your doors just to take a view of your house? The food inside was very costly, I wanted to have a traditional Rajasthani food here, but seeing the prices I settled for a Biryani which wasn't anything like a Biryani, I can Rajasthani food anytime I want, perks of being a Rajasthani,after the food we roamed around the streets of the fort which are more like a maze, easy to take a wrong turn and get lost. After a couple of hours, we  decided  to come down and head for our separate destinations. Ashik moving to Pushkar and Me to Bikaner with a remote town in between. 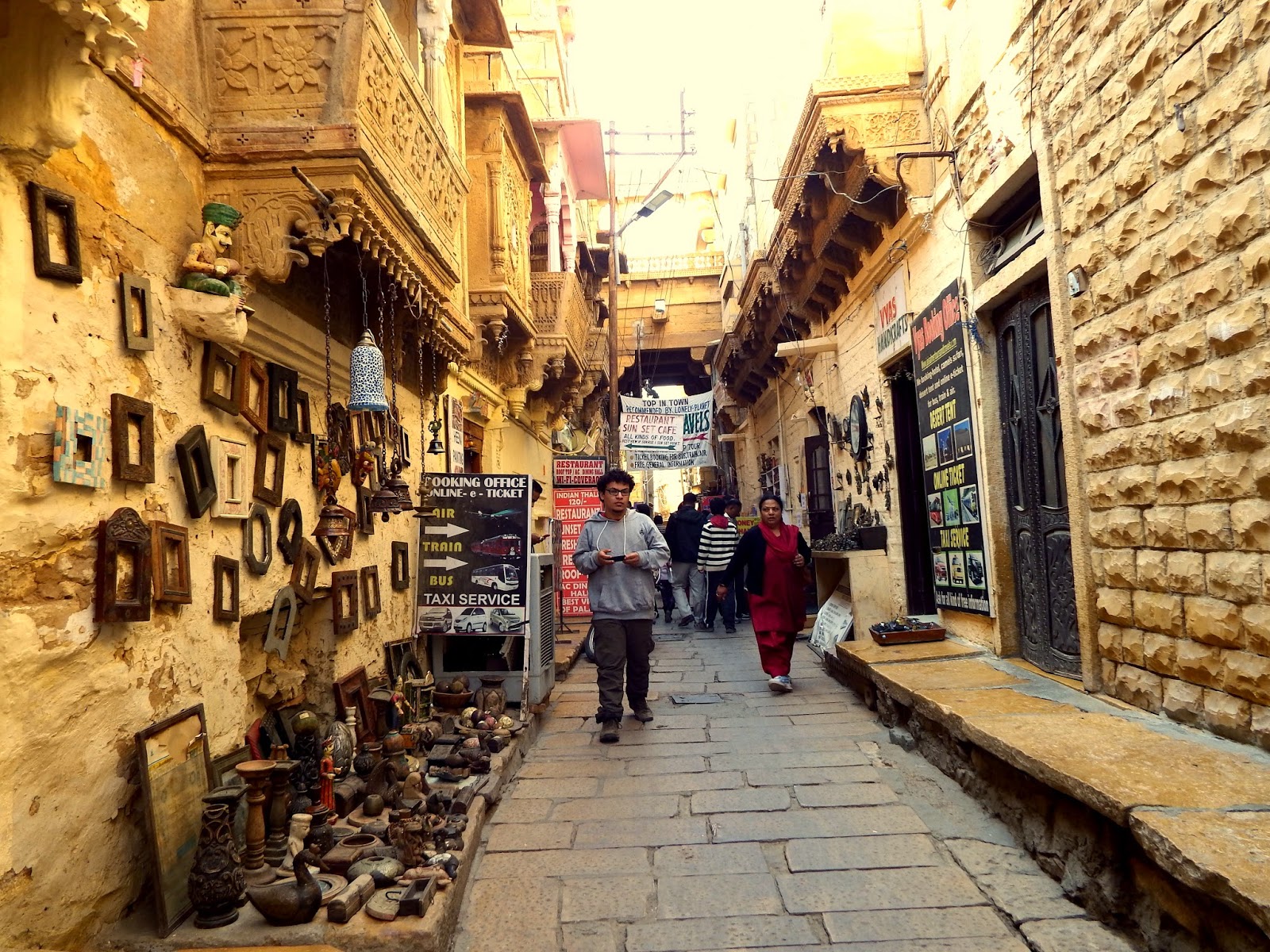 On my mother's repeated requests, I had to make a stop at Ramdevra Aka Runicha Dham, there is a very famous temple of a saint who took a samadhi(mortal exit from the human body) there, it is one of the most pious places in Rajasthan, I'm not a very religious person and certainly not a very big fan of temples unless they have a story to tell or have something amazing to offer, but then it is very hard to ignore requests from your mother which is as simple as visiting a temple on the way to my next stop (Bikaner). The town which is usually crowded had a vacant look, it was the off season, it is the exact opposite in the August-September when there is a big fair held in the town, people from all parts of the world irrespective of their religion, caste, or creed visit the temple during the time. I took a room nearby the station from a guy who was drunk and somewhat reluctant to give a room to a single guy, I requested him that I had a train at 1 AM and it would be very hard to come to reach the station at that time if I took a room far away, after repeated requests he rudely agreed, I was still skeptical about staying in the place, because of the group of drunk men downstairs and because I knew nothing about the place, after putting my drained devices on charge, I decided to go for a walk around the town, an elderly gentlemen told me to rush to the temple, because it was supposed to get closed in 30 minutes, I did exactly that.
The interior of the town where very different from the exterior, the temple was somewhat crowded but seeing the setup of railings in the place, the crowd felt small, I made a quick walk inside the temple and came out to have my dinner, the guy at the Dhaba offered me a thali at 70Rs, with three curries(one of them being something only available in Rajasthan, Bhujia ki Sabji) and 5 Rotis, It took me minutes to finish everything, I enquired for the cost of extra rotis and the guy replied that I can have as much as I want of everything, it was an unlimited thali, I ordered three more chapatis and another round of curries, I was full this time. I walked back to the room hoping that my stuff was okay, I saw that the lights of my room were turned off, with the drunk guy nowhere in sight, I thought that I was screwed. I was relieved to see that everything was still in place, the guy had just turned off the main switch for the room. I had three hours to go, the guy at the train ticket counter told me that I could but the ticket only after midnight because my train was officially the next day. I called some friends, watched friends on my laptop to keep me awake, If I had missed this train, there was nothing I could do till tomorrow afternoon. at 12, I checked out of the room, waking up the owner to give back the key.

I ran to the railway station to get the ticket, to my surprise, the counter was closed. I waited for 40 minutes expecting the counter to open just before the train was announced, I was all alone on the platform, there were a few homeless people sleeping on the other platform, but they were inanimate, with 10 minutes remaining in the arrival of the train, I ran to the counter again, it was still closed, I ran to the station master's office, the lights were but there was a big padlock on the grill, I looked all around, and found a guy with a stick to scare the dogs away walking towards me,he saw me touching the padlock on the station master's room, and ran towards me, he was the station master himself, he was coming in to announce the arrival of the train, I told him that the ticket window was closed and I wanted to buy a ticket, he went to quarters just behind the railway station and shouted a name, after shouting a couple of times, I saw the ticket counter guy coming out, he was half asleep, the station master told him to get me a ticket for the train, he took the money from and hurried to the counter, and minutes later I had my ticket in hand, the train was running late, it came 10 minutes later, it looked as if it was tired, I got into a reserved compartment even though I had an unreserved ticket, too my surprise, there was no one in the coach, this couldn't get worse, I closed all the doors except one so that in case I slept, someone could still get in, I didn't sleep for the next two hours because of the cold and the fear of being alone in a railway compartment was working better than caffeine,this was the first time I was regretting travelling alone, a few BSF personnel got in at a stop, and I was relieved, their chatter actually made me sleepy and I woke up straight in Bikaner.