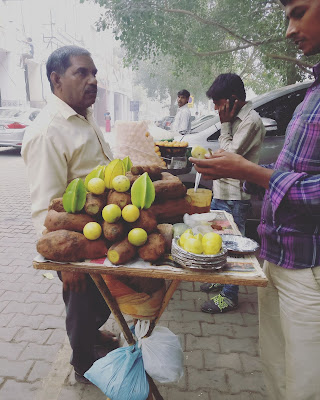 Me and my friends have walked about 10 kilometers for the day, a couple of them are sitting by the road to rest there legs, one is at Sarvana Bhawan to check for the waitlist.


I stand somewhere in between, beside the line of hawkers; a young kid selling ramladdus, a man selling boiled sweet potato, and another one in the distance with panipuris.

A middle aged man comes in shouting with a stall of ramladdus on his shoulder, something about him giving money to cops and they still asking for 3 weeks of dues, he asks the kid with the same stall if the sale is good there, the kid shrugs his shoulder, the man further starts shouting and enquires to the sweet potato seller about the money he gave to some old cop, he replies with a certain amount, the kid says he hasn't paid anyone.

The man sets his stall nearby, the kid says that the sale will drop if two people sell the same thing,the man again says he has paid the cop, the kid hasn't. The kid looks worried and calls someone, I don't hear the complete conversation but it's something about money and cops.

I settle on wall near the man, and ask him about how much do the cops charge and what is the issue here?, the man smiles and whispers, "Police wale to sab set hai, issko bhagane ke liye natak karr riya hu, lagau ek plate aapke liye?"

(There is no issue, the cops are all settled, this is just a drama to get the kid removed so that my sales go up, should I set up a plate for you?)

I deny the offer and point towards our waiting que, moments later the kid leaves.

In Picture, the people from the above drama
- Ashish