Home » Travel » Chintu Travels: Day 8. Bikaner, Rats! and the TTE who got scared.

Chintu Travels: Day 8. Bikaner, Rats! and the TTE who got scared.

The ordeal of being alone was now feeling like an adventure, I have a story to tell everybody. I reached Bikaner early in the morning, my plan for the day was to cover Bikaner and nearby places in a day and then move to my birth place Sardarshahr, stay there for a couple of hours and then leave for Ratangarh to board a train to Delhi. The last leg of my trip.

Bikaner is known for it's sweets and snacks, the namkeens especially Bhujias are known all across India and Indians in other countries. Bikaneri Bhujias are a must in a Marwari house, Food outlets like Haldiram, Bhikaram all were popular sweet and namkeen makers based in Bikaner. The other famous thing in Bikaner is it's proximity to the border and the dunes, I remember seeing tanks on roads during the Kargil War.  I was staying at my Aunts house in Bikaner, as soon as I entered her house, I started talking to my Cousin, Anurag, discussing about our childhood, we have a lot of memories together, his family was based in my town near Kolkata, but  approximately 7 years ago they moved to Bikaner, the first place I visited in Bikaner was the Junagarh Fort, I have travelled to Bikaner numerous times, but I've never seen the Fort from inside,  The fort houses a lot of antique which is still owned by the king, including a first world war aeroplane,which was a gift to the  then King from the British for his services in the war, we roamed around the fort for a couple of hours, talking to people and guards. I acted as a translator between a Bengali Lady who didn't know Hindi and a Guard whose Hindi had a Rajasthani accent, it feels good to use your language skills to connect people!

I had to coerce my cousin to go to Deshnoke with me because it wasn't in schedule I had told him and he was bored of the place, but to come so far and yet miss a place like this would be disappointing, to visit the Rat temple, it is situated 30 Kilometers from the Bikaner, The temple is Dedicated to Karni Mata and it houses approximately 20,000 rats!  There are different legends about the rats, some say they are an army of a king who were cursed by the Goddess to turn into rats, some say they are they descendants of the children of Karni, who were turned into rats by her to save them from some kind of danger.  The temple has been part of many documentaries, Ripleys did a show on it, and it is one of the Legends of the Indians in the popular strategy game Age of empires 3, one thing I noticed  and found weird about the Temple is that there aren't any rats visible outside it, but when you go inside, they are everywhere! I talked about this with a local shopkeeper and he said, that the rats inside don't come out, if they do, they are cursed and they can never get back in. After spending a good 30 minutes inside the temple, and  nearly dropping my camera because I thought a rat was on my feet(it was!), we started back for Bikaner, in between I dropped my Plan to go to my birthplace, because it was very late to start and it would have taken approximately 4 hours in a bus there, I would have missed my train, because the station would have taken another 2 hours. We were in Bikaner in half an hour, I decided to take a nap, because I wasn't able to sleep the last night(read the last post for the reason). 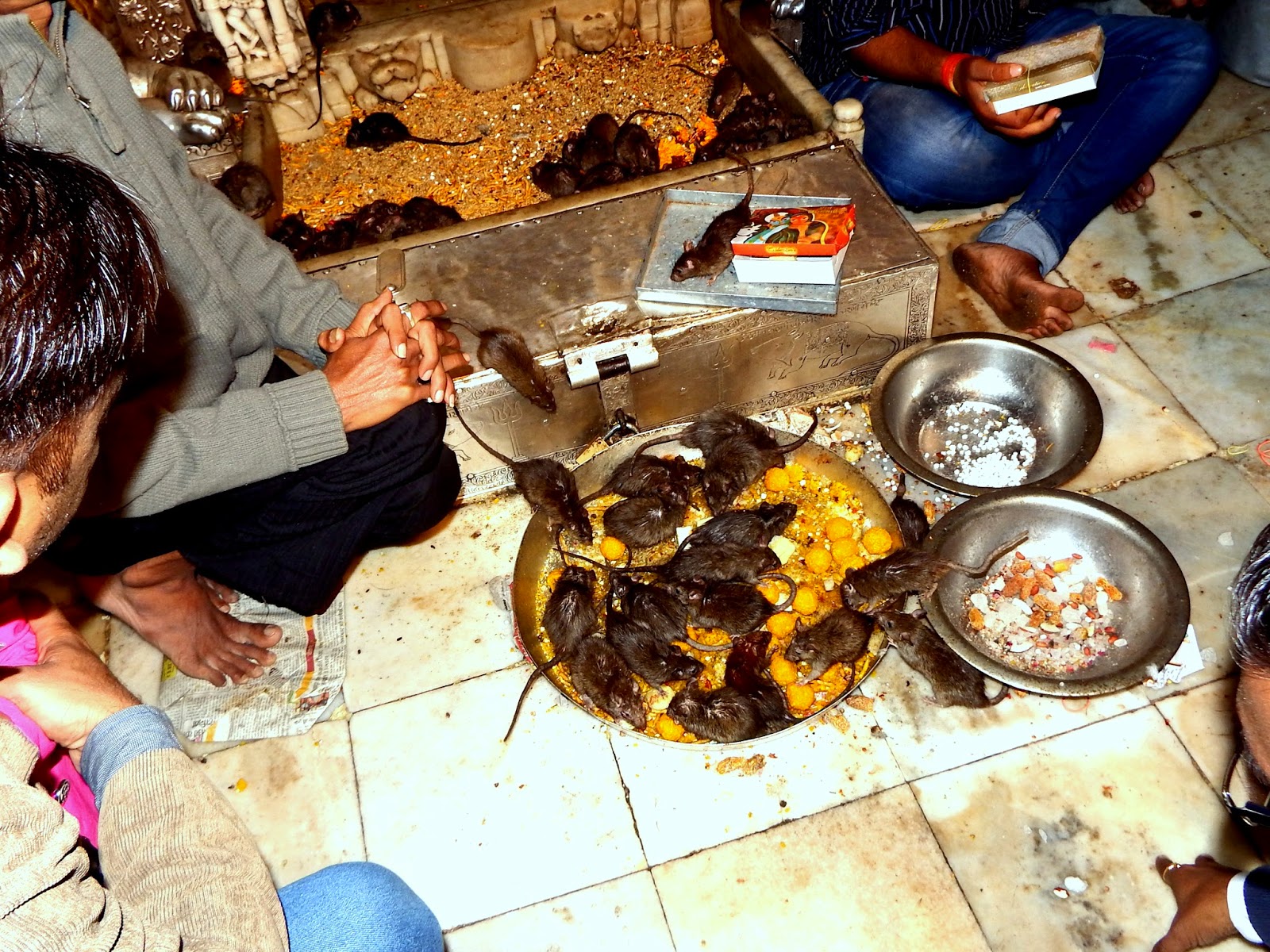 My Train to Delhi was starting from Bikaner, even my ticket was from Bikaner, but the boarding was given from Ratangarh, which is approximately 100 Kilometers from Bikaner. Reason? Seats weren't available in the Quota from Ratangarh so, I booked a ticket from Bikaner by paying approximately a 100 rupees more, I was confident that since the ticket was booked from Bikaner to Delhi, I would have no issues in the train, but I was wrong, the chart showed that my ticket was from Ratangarh and the TTE told that I wasn't authorised to be on the train before Ratangarh, which still had two hours to arrive, the TTE took me to a corner and asked me to give him some chai-pani or I'd have to pay the minimum fare plus a fine of 250 rupees,The fact that I had paid the fare from Bikaner to Delhi I wasn't adamant on paying anything to him, I discussed this with a co-passenger and he advised me to move to the general coach, but as it was an air-conditioned coach, there was no way to move to a general coach without deboarding the train, so I did the next best thing, I went near the door and sat with the coach attendant, the co-passenger told the TTE that I got down from the train on the last stop and move to a general compartment. I entered the compartment again when Ratangarh was only 30 minutes away, the TTE was glad to see me, I thought that was because he could make some money of me, but he told me that he was worried that I moved to general coach at this time, this train was again something like the previous one, no one travelled in the general coaches, because of the winter, he smiled and told me that I won't have to pay anything, and asked me to get on to my seat, as my official boarding station was about to arrive. I was confused. I went to my seat and had a sound slumber till I was woken up by my co-passenger to tell me that ab Delhi door nahi.