I am now into day 6 of my journey, 5 days passed too soon. I reached Jodhpur late yesternight, and took a tuk-tuk to the Zostel, Kiran and Matteo were waiting for me there, Kiran had already been there for a day and Matteo had reached just an hour before me. He took a bus from Jaipur, while I made a stop at Pushkar, not feeling hungry, and bitten by the awesomeness of cooking and eating, me and Kiran decided to cook a meal inside Zostel, I was carrying some Rajasthani Kesariya Feni which my mother had packed for me, it is best served with warm milk, so we went out and brought a packet of full cream milk,  I don't know if Kiran liked it or not, but he didn't have anything after that, it was heavy. We planned for the things to do next day and went to bed early.


The Blue City
I was woken up by Matteo at approximately 8 in the morning, and I woke up Kiran, we freshened up and met in the Lobby. Matteo was sharing his room with Ashik, he tagged along with us too. Our first stop was Umaid Bhawan Palace, The residence of the Maharaja of Jodhpur; Kiran was visiting it the second time, it was closed the day before because of some royal celebration. I personally didn't find anything great inside the Palace, it was full of the Kings old junk and large portraits. The best part about the palace was outside it, the vintage car collection of the King, I've never seen cars this beautiful before, after some selfies with the car, we came out of the palace and headed towards the old town, The old town is bounded by a wall with several gates, anything outside the wall is considered to be the part of the new town. The old town has still captivated its charm, you can see people on street in traditional Marwari clothes,we reached the Clock Tower which is considered as the center of the city, a few meters before the clock tower there is a famous sweet shop that sells the famed Makhaniya Lassi of Jodhpur, we all decided to have a glass of it, at Rs 30 per glass it wasn't cheap, but it was worth it, after walking around the old town for a while,I had read that the city was famously called the blue city because of the blue painted houses inside the old town, but I had failed to notice a single blue house, we  headed for the Mehrangarh Fort, Kiran had to leave us here because he had already been there the day before and had planned to visit the Mandore Gardens, 10 Kilometers from Jodhpur, the rest of us walked up to the Fort, the blue houses had started to appear. 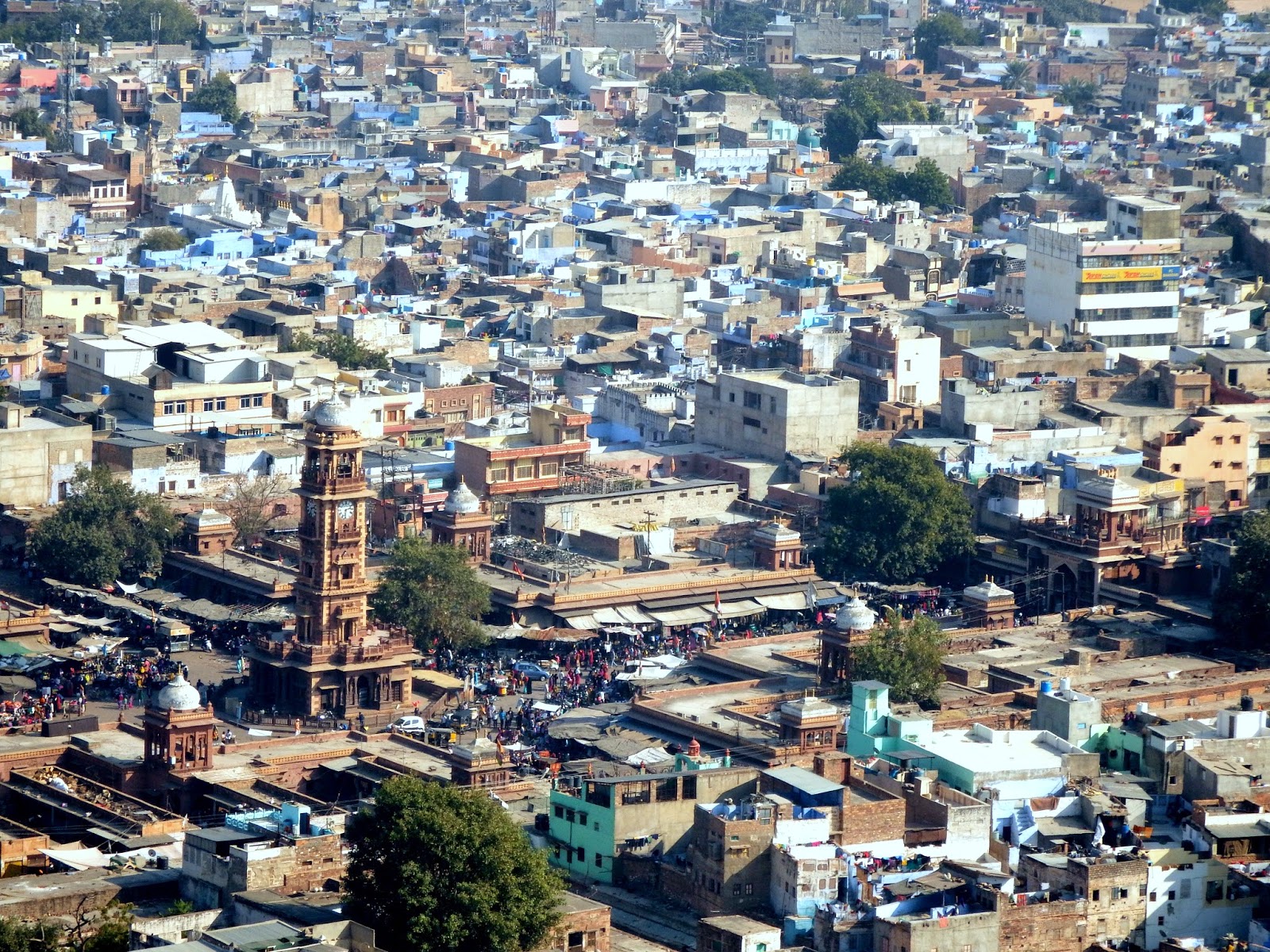 Bane ka Qila
I had seen two forts till now, The Red Fort of Agra and  The Amber Fort of Jaipur in that order, and they were both very grand. The Amber fort was an upgrade over the Red Fort because of it's intricate craft on the wall and window grills and its size. I was expecting something like this here too, and as expected it was grand! Very Grand! We bought a normal ticket for Matteo to enter the fort because we were tired of his rants of Foreigners paying more, but after we entered the fort, he started to feel the pressure of having an incorrect ticket, we told him to repeat the following words if someone asked him something, "Kashmir se hu, Hindi nahi aata" because I felt he looked like he was from Kashmir, with his thick Italian accent sounding similar to some of the Kashmiri Boys I had met in my train from Delhi to Agra,  he kept repeating the lines every few minutes and we kept chuckling. The view was panoramic, you could see the entire city, the clock tower plus there were giant cannons! The feeling that Batman was once here added to the excitement. After some photos and selfies with the cannons and the city in the background we came down from the fort had our lunch and roamed in the inner lanes of the old town breathing the smell of Rajasthani Spices. 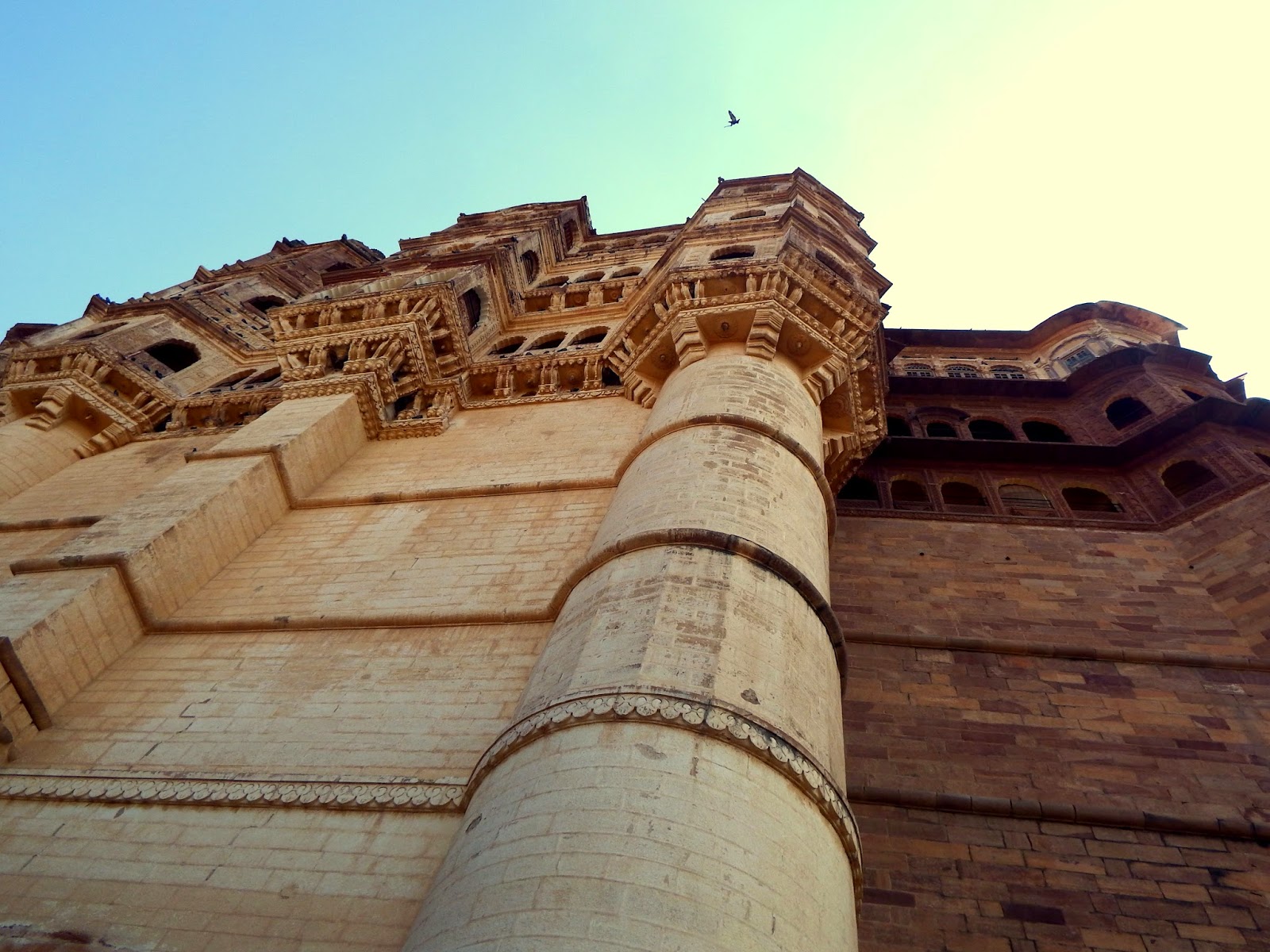