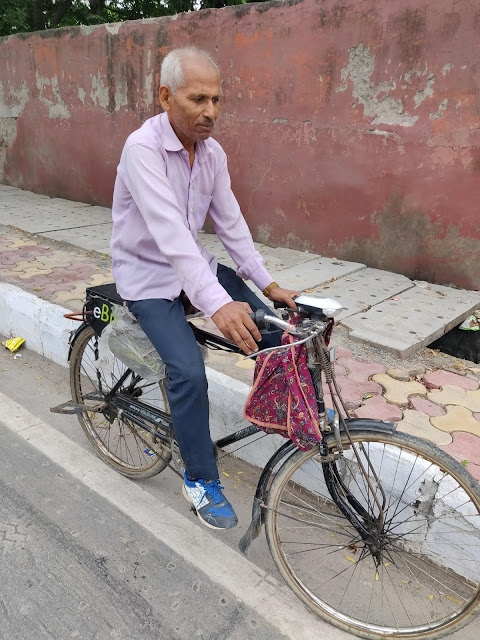 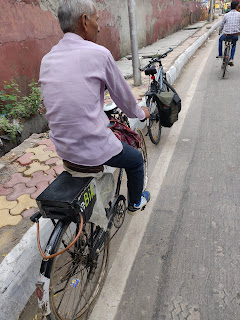 On my commute to the Metro Station, I saw a guy on a roadster ( Ghoda cycle or Dudhwala cycle as pe decoratively call it) cruising through traffic, almost at pace with me on My Scott. While I was labouring through, and pedalling, he wasn't!

I noticed a huge box on his carrier and a controller on the handlebar, with a key attached in it. I asked him if this was an electric cycle, he gave a huge grin and nodded his yes, I requested if we can stop and talk for a minute. "Thoda aage chalke rukte hai, yaha jaam hai bohot"(Let's stop a bit ahead, there is a traffic jam here)

We moved alongside for kilometres and found a stretch with relatively less traffic. He stopped I parked my cycle and was moving towards him, I heard a thud, some idiot coming from the wrong side had brushed against it, and it fell. Both of us glared at the idiot, and he rushed away, I reparked my cycle on the sidewalk this time. 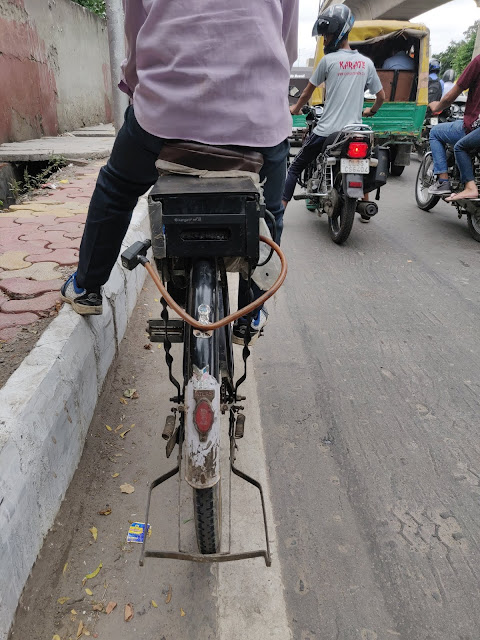 "Abhi to naya naya sab aa gaya hai electric cycle, kai dukan mein dekh yaha mila nahi, ye jab banaye they tab kuch nahi tha aisa"( There are a lot of new electric cycles now, I have tried searching for them at a lot of shops but none of them have it, when I got this one made there was nothing like it ) 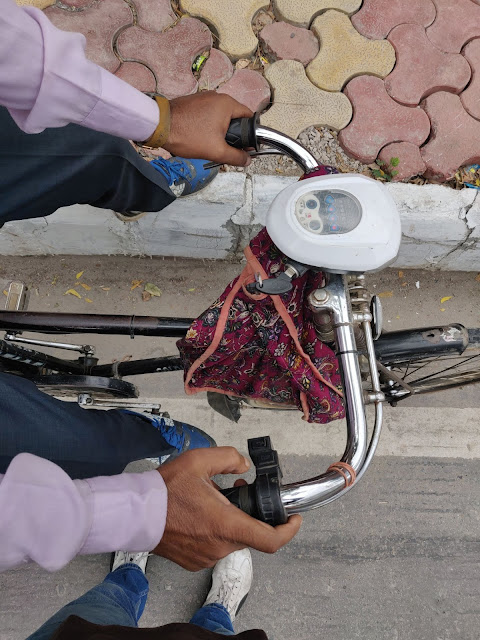 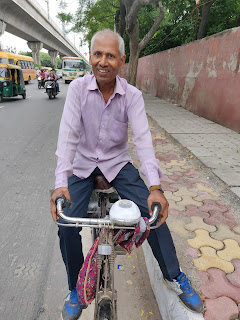 I ask for his permission to take a few pictures and he agrees, and continues.

"Isme 3 gear hai, ye button upar karo to 1, beech mein 2nd, aur neeche 3rd, abhi 3 pe chala raha tha. ( There are three gears in it, you press this up it is 1, 2 in the middle, 3 when down, I was riding on 3rd)I take a detailed look at the setup, the box on the carrier contains a battery pack and a roller that moves the tyre, quite an interesting setup.

"Naya cycle sab mein battery beech mein hota hai to balance bana rehta hai, isme peche rehta hai to thoda balance banana padta hai"
(The new bikes have the battery in the frame so they have a better balance, this one has a battery at the back, so you have to work a bit harder to balance)Smitten by the bike, I ask him if I can take a picture of him, I write about cycles, and will be writing an article on his bike, he laughs and allows.I shake his hand and we start to move, 10 seconds later I realize I forgot to ask for his name. I rush to him.