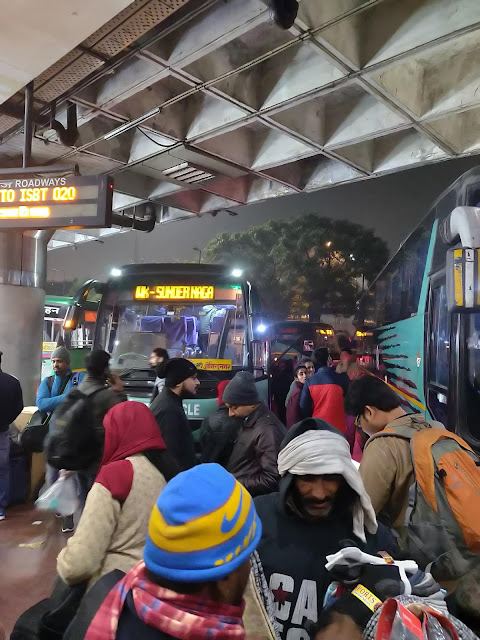 Murphy's Law 2.0.
If things can go wrong, they'll fucking go wrong.I made a last-minute plan to take a trip, booked my yes yesterday, my bike had a couple of minor issues, gave it for servicing assuming it would be 15-20 minute thing.10:00 AM: After all the alarms have gone bonkers, I am still in bed.10:30 AM: I finally get up, brush, take a dump and a quick shower and arrange the house a bit.11:15 AM: I unhook the bike, ride it through somehow crazy traffic on a holiday to the bike shop.12:24 PM: I leave the shop after telling the technician about the fixed that are needed to be done, and leave for Rajiv Chowk, to meet my friend who is here from Germany. We are meeting after two years, I last met her in Varanasi.12:45 PM: I am at CP, we go for lunch, I haven't eaten a thing till now. I have to my best friend too in a couple of hours, so I eat light.2:30 PM: My german friend has to book her tickets but she doesn't know how to do it, IRCTC doesn't allow booking in Foreign Tourist Quota, We go all the way to New Delhi Railway Station, after running around to ask where the foreign tourist office is, we cross the railway station to go to Paharganj.2:50 PM: She hasn't brought her passport and Visa, which are mandatory. She takes an auto and leaves for her hotel, I cross the railway station and reach New Delhi Metro and then Rajiv Chowk.3:20 PM: I meet my best friend and we go for a quick lunch, and then some shopping.5:15 PM: I reach the bike shop and find that one of the issues has been fixed, but to fix the other issue we'd have to try out another chain, which isn't in stock.6:00 PM: After scanning their godown for another chain and not finding it I start riding for home.6:58 PM: A 30-minute ride takes 58 minutes because of unexpected traffic jam, and google maps rerouting me through a route which is about 3 kilometres longer.7:14 PM: I have done my packing in record time, my hands are numb from the cold outside. I start riding the 27 odd kilometres to ISBT, my bus is at 8:29 PM.
8:35 PM: I reach the bus stand and my bus has left 5 minutes ago, I. drained and cramped. I call a colleague who is also on the bus, and she tells me that it has left. I talked to the conductor and he says I should get on to any bus and can catch it at the usual Dhaba Stop at Murthal.8:55 PM: No bus agrees, as there are no seats, I go to the HRTC counter, and an old man tells me that I should book another ticket for a later bus. I am told that I'll get a bus around 9:27, and the ticket for that would open at 9:14.9:14 PM: the bus arrives, the conductor tells that the bus would not take the route I have to get down on. The bus I should take would leave at 9:46, and tickets would open for that at 9:25.9:25 PM: I walk to the counter, I try to pay with my card. I see that AM ng everything that is happening today, I have forgotten to withdraw cash and only have 20 Rs in my pocket. I try to pay by card, but the card machines don't work. I tell the ticket counter guy that I'll get the money from an ATM, and ask him to reserve the ticket.9:35 PM: Both the ATMs are out of cash. I try at a few shops telling them that I will pay them via UPI and if they can give me cash. One guy says he'll give me 2000 but will take 2300 Rs. I just walk away.9:42 PM: I am still looking for cash, and walk back to the ticket counter, and try again on the machine, and the machine doesn't work, I now ask people around, if I can pay them the money via google pay, and can take some cash. They are all amused at a guy wearing a high visibility jacket, and none of them agrees.9:46 PM: I go back to the counter, the counter guy tells me that I should get on the bus, and pay the conductor at Chandigarh or Baijnath. He sees the clock and says but the bus has left. It is 9:50 now.9:52 PM: I hurriedly unlock my bike, mount the bags and rush behind the bus, as I feel It couldn't have gone far, lo and behold, the bus is hardly 300 metres away stuck in a traffic jam. The conductor opens the dikki, I put my cycle in and get on the bus and grab my seat. I finish both the bottles of water I have and hope that the cramps would go away. I am still starving and dehydrated.