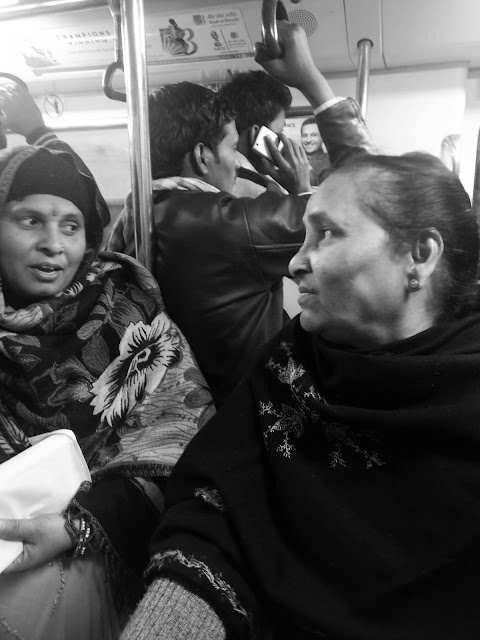 I enter the metro at Janpath and take a corner beside the door, a couple of aged women stand behind me, the metro starts with a jolt, the woman in front (A) falls on the woman behind her (B). A smiles and apologises "Sometimes the metro starts..", "It's okay, I understand" B interrupts her, silence ensues for the next 5 minutes.


A asks B about her destination, B replies with Badarpur, A says that she is going to Sarita Vihar. A says that she usually takes a bus as it is cheaper, the metro is quite expensive now, B agrees, "Though it's cheaper today by about 10Rs, because it's a sunday" she adds.

A continues the small talk, "Do you live in Badarpur?" she asks, " I live in Krishna Nagar, I came to CP to see a lawyer, now I am going to Badarpur Jail to see my son"

A stays silent for a minute, I can see the almost apologetic expression on her face, I think she regrets the small talk now.

"Actually, his wife has filed a false complaint against him, they have taken over our house, me and my husband were not here, they have had a rocky relationship ever since they have been married, we went to our village and one fine day cops came and took our son away, now she and her brothers have occupied our house, she is a primary school teacher, but still she is doing all this", B explains with a weary smile.

"Did you try settling for money?" A asks.

"She doesn't want money, she just wants to take over the house, I am waiting for my son to come out, once he comes out we'll take back our house, they are trying everything to keep him locked, they know that once he's out they'll have no claim over the house" B says in single breath, still maintaining the smile.

"He'll be out soon, don't worry" A adds.
"He'll be actually out tomorrow, our lawyer has brokered a deal with the cops, we are already planning to take our house back" B says, this time with almost a triumphant laugh.
- Ashish