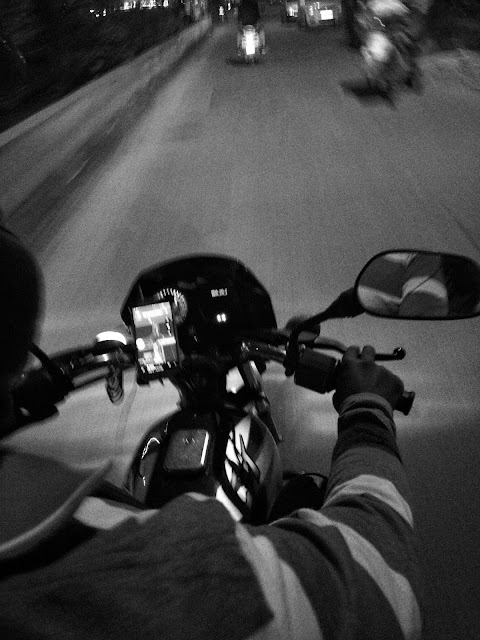 My first ola bike guy cancelled the ride after asking for my destination, I didn't realize this, and kept waiting for 5 more minutes till  I got a new notification about a new driver being assigned.

I called him up and amdist the racket around, I could just yell gate number 3, and he just said 'coming' and disconnected.

He asked for my OTP in a familiar accent, and after I showed it to him, I shot the question 'Bengali?', and nodded his helmet covered face in a yes, I just said a 'me too'; there wasn't enough time or comfort explain the not a bong but from bengal thing.

As soon as he started my ride, he shot with questions in bengali.

"How long have you been here?"
" About two years", I responded.

"I have been here since 2011, long time"
"Aha, good place to work?"
"Yes, a lot better than bengal, everyone get's to make money here, too many opportunities, in bengal, even if you want to work hard, you won't achieve anything
hard work has left bengal long time back. "

I kept agreeing with "Hmms".
"Do you think this is because of the politics there?" I asked.

"No, it's not the politics, it's the people, essentially all parties are the same, goons at ground level, be it didi, or a dada, the youth there doesn't want to work hard; join a club, sleep in the club shed, or play carrom or cards in the afternoon, join a political party follow the political leaders, the one who has clout in the area is the best one, that's what they all do.  I drive Ola only part time, during the afternoon I do some verification work for a company, and get paid around 15k for it, Ola gives me 20 to 25k, I have my own home here, made from my own hard earned money, I couldn't have done that in Bengal, the same verification company pays 5k to people in Calcutta, people still work in it there, and they have been doing so for 3-4 years now, no increments nothing. A political party throws out a company like Tata, and people vote it to power again and again would only happen in a place like Bengal. The wise have left that place long time back."

I could just agree with him after the monologue, everything he said was the harsh truth.

While I reached my destination, I had already decided on writing this, and took the customary picture that goes along with the drama while he slowed down.
- Ashish