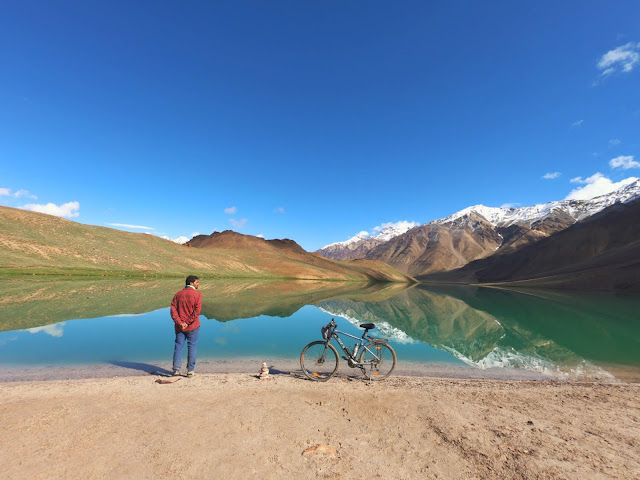 After a night of turning and twisting around for warmth, I could hear people talking outside the camp. Everyone else was up around 5, me and Ravinder woke up around 6, Avinash and Sowmya had to reach manali today as they had to pack their bike and ship it back to Bangalore, I had to leave for Manali too, a 130 kilometer stretch of what people call roads.

Everyone else left in the Eeco around 6:30 for the lake, they'd drive the 4 kilometers to the parking site and hike for another kilometer, I had to pack all my stuff as the freezing weather had finally allowed me to empty them and wear all my clothes and use the sleeping bag I had spent so much money on.

I cycled to the lake, a mild climb and then a milder trail to ride on. When I reached the lake there was no one else except the Eeco people ( I prefer calling them Eeco-friends now), Avinash clicked few pictures of me on demand while I was on top of the hill. As I reached down, Avinash and Sowmya prepared to leave, while Monu and Aradhya left to get some water and cigs to smoke in the cold.

My helmet had a thin sheet of ice when I woke up, and as I rode it melted and dripped onto my face as if I was sweating. After spending a few hours around the lake I rode back to the camping site, and started a ride towards Manali. After crossing the most terrible of "roads" and a few ice cold "nalas", and a lunch at Batal, I reached Chattru around 6 and decided to stop.

As I talked to the Dhaba owner about accommodation, I surprisingly saw the Eeco again, I wasn't expecting it to make it till here.

I had to hike for about 2 kilometers via hilly farms and make a couple of satellite calls while the owner creepily stared at me, he laughed when no one in ky family picked up the call. It had been 3 days of no connectivity and I was pretty sure they thought I was dead. The entire thing of walking to a std booth and paying ridiculous amount to pay for a minute of talking made me feel like I was still in the 90s.

Since it was our last day, we camped again and decided to splurge on dhaba food, instead of cooking as we all were tired.
- Ashish