I started after a quick breakfast at Cafe Kunzum top, the initial plan was to ride till Kaza and make a stop there, I had decided to skip Dhankar. Then I heard that Key monestry had good accommodation available and decided to move till the monestry.

I packed up, had a final conversation with Mr Tashi about his cycle, and the kind of upgrades he can do.

About 10 kilometers later, I saw a cricket match with a full on AIR kind of commentary. I stopped to watch the match for a few minutes, I was offered chai and puri which was being given to all the people who were watching the match, and moved on after 10 minutes. 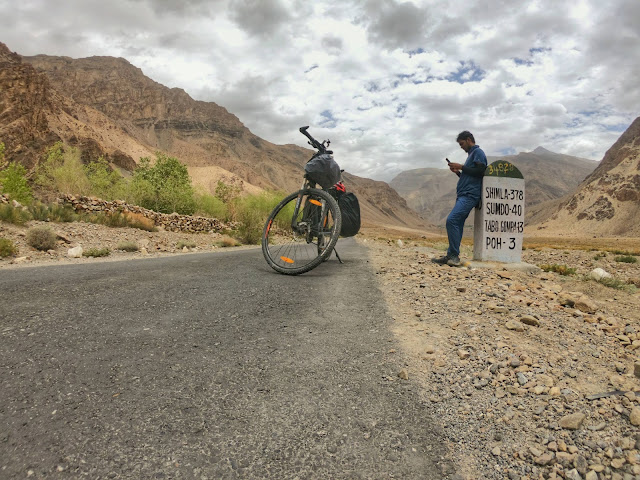 I reached Kaza around 4 PM, leaving me good 3 hours to ride the next 16 kilometers to Key Gompa. I sat for my lunch at a dhaba and over a bowl of thukpa, went through the map that the store owner had. He was curious about the route I had taken, and helped me plan the route ahead.

I started for the monastery after a good 30 minute rest, the next 16 kilometers were cold and windy. The wind was so strong that I could only move at a crawling pace. I had to put on my winter gear for the last 2 kilometer climb up to the monastery, and reached there tired and cold.

Thankfully, there were rooms available in the monastery, lamaji prepared a hot meal of daal and tingmo, and after a long discussion about life and philosophy later with him and other guests, I am in bed safely tucked in at 4200 meters.

I am still unsure if I should take rest for a day or proceed further. Todays route change puts me 3 days ahead of my schedule.
- Ashish