I missed several alarms and woke up around 9 only after the noise of bricks falling on the rooftop. Last night was cold and windy, the wind often making howling noise as if warning to stay indoors; The morning was similar, with a bit of cloud cover.

I had a simple breakfast at the homestay and packed up, promising Mr Panma too to put them on map, these are people who need more business and I'd be happy to bring some.

Today was the first day I had to take out my winter gear for riding, but then had to lose it because it got sunny and hot. After a complimentary tea at a military Garrison I cross the infamous Maling Nala and then via a few more zigs reached the bottom of the valley, and then left behind the roaring satluj and met the calm Spiti river. A much welcome change. 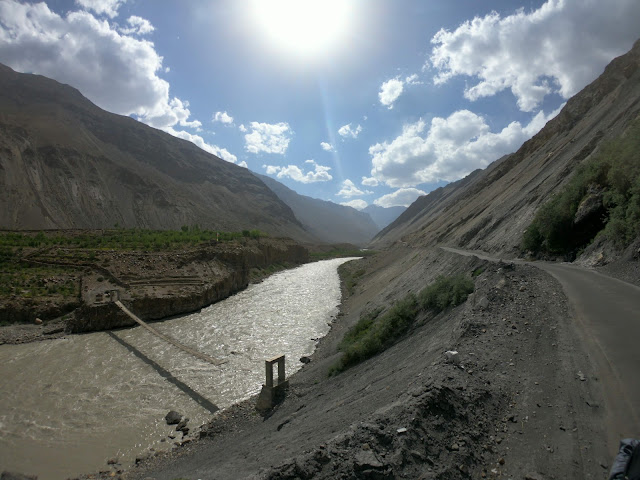 A lot of people did stop and question, there was group of women who clean the road of the debris brought on to it by the winds, they stopped me and curious questions, I followed up with my own questions about their work, and teasing one of them for forgetting her helmet as she asked me to wear mine all day to stay protected from shooting stones. I did and it was much needed.

I reached Tabo around 4:30, and was immediately stopped by Mr Tashi, who asked me questions about my bike and if I had a repair kit, he had a 15 year old cycle which was still in great shape and had specifications which people in India still don't own, he told me stories of how he has toured the entire country to find his calling and eventually settled for a business in tabo, all this happened while I helped tru his rear wheel.

I am staying at the Monasteries guest house, a bit drab then the other places I have stayed and expensive too, but I have been told it all goes for a good cause.

Dinner was at the Local favorite Kunzum-top cafe, a bit of a splurge than a usual meal, but then it's my birthday, though the bill was still a fraction of what I'd pay in Noida for a similar meal.
- Ashish