Cycling To Spiti, Day 9, Such a Losar.

Oh such a Losar.

I woke up around 9 and lay in bed for another hour, in mood to move ahead. I had ridden for four days straight and on all days longer then planned.

Around 10:30, I had this urge to move ahead, I had my bowl of tsampa porridge, a bowl of daal chawal, and packed things up by 11:00, all the people in the monastery last night were not there, some had hiked to kibber, some biked to kibber, two people from the group there still there, Adarsh being one of them, they had mild symptoms of AMS. I gave them three tablets of diamox in case it gets worse.

After a few words of advice from Lamaji, and a short goodbyes, I moved towards kibber a tough climb for the day, by the time I reached kibber it was 1:30, and I was starving, I looked around for dhabas but all kibber had was restaurants that offered maggi and sandwiches, which in my opinion wasn't enough for the day ahead. I asked a lady working on creating a better approach to her house and she called her neighbor, Mrs Teshi insisted that I had lunch at her home while I insisted that I look for a dhaba, she won. 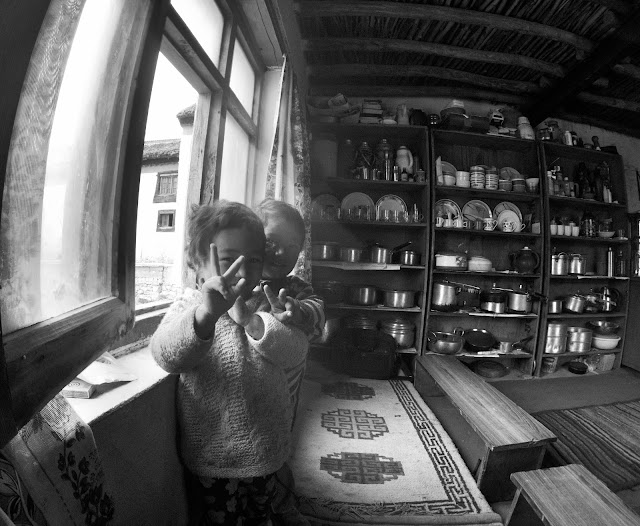 I had a hearty meal of daal, chawal, roti, sabzi, and chai. Her 90 year old mother in law offered me some whiskey, it was funny to be offered a drink from the matriarch of the family; I politely refused, the kids played with my helmet and my camera and ended up recording quite a lot of footage, I'd try to include it in whatever I end up doing with the videos.

I then rode non-stop to Losar, the first 20 Kilometers via Chicham was one of the most beautiful roads I have ridden on, and the last 20 Kilometers being bumpy and tiring, with strong head winds.

Today was the first day I had my winter jacket on for the entire day, I even had to get my winter gloves out.
With no sight of the sun the entire day, and a mild drizzle later I reached losar around 6, all the hotels and guest houses were full. I had to ride back 3 kilometers to stay at chichong village at this beautiful homestay beside the river with a lot of interesting people.

Funny how we never talk in cities, but never stop in villages.
- Ashish