I woke up around 9 AM, the bad roads of yesterday and the day end climbs were too tiring. The first thing I did after waking up was fix the front derallieur and crank. I noticed that there was a bend the 2nd cog on the crankset, I have no idea what caused this bend. This was measing with the chain and I feared it might break. I borrowed a screw driver from Bhusan and brought the cog back in shape, a little fine tuning later the drivetrain was manageable. 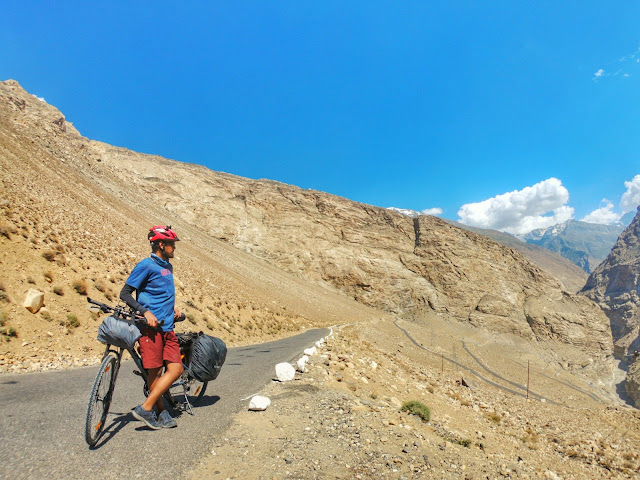 By the time I finished with this it was 10:30 already, I took a bath to get rid of all the grease, packed everything up and loaded on the bike, the paranthas in breakfast made by the caretaker of the guest house, Mr Tasrem, were the best till date.


Before leaving I took a picture of their best room, and the front of the guest house and added it to google maps, and I am now hoping for my crate of Kinnauri apples which I'd have to pick up from Azadpur mandi, Delhi.

I rode up to Puh village, via a military base and reached NH5 again. To my rejoice I met another cyclist coming in from the other direction, another spaniard like my last years companion José, he started from manali a week back and was going back to manali via jalori pass. He gave me an update about the road and warned that todays route was all climbing even though it was a short distance.

I met sharma family again enroute, I have crossed them thrice till now, they had shared their contacts in case of an emergency; I'll definitely meet them again after goig back to Noida.

I reached Nako after about 7 hours of climbing and stayed at Rikpo Guest house, though not as cheap as the places I have stayed at till now, but the best.

After a delicious meal of tingmo, daal chawal, and chai I go to bed, hoping to wake up a year older.