I woke up late an hour late than the planned time. I suck at waking up on time, alarms don't usually work, because the guy who invented snooze is an asshole.

I had little conversation with Rahul's parents last night, we came home too late. I packed my things, Uncle and Aunty had made a delish breakfast. Paranthas! No matter whose home it is, homemade paranthas are always delicious.

After the breakfast, I bid them adieu and took a BRTS to the Railway Station. I had to put my backpack in the cloakroom, I was going to catch an overnight train to Veraval and would've had to come to the Railway station anyway. Of all the solo travel I've done, this was my first tryst with an Indian Railways cloakroom.

I had made no plans on how to reach these places, I could've taken a train or I could've taken a bus. I decided on the latter because buses were readily available every few minutes but for the train I had to wait for at least an hour more. I took an express bus to Mahesana. Modhera is about 20 Kilometers from there. I don't remember much of the bus journey, all I remember is getting into the bus, buying a ticket taking a seat and then falling asleep, and then being woken up every few minutes by a loud honk. Mahesana arrived after a sleepy two and a half hours. I would have missed the stop if it wasn't for another loud honk waking me up. The next thing to do here was to take another bus to Modhera. I asked a fruit seller and he pointed to the bus stand on a road going to a different direction.

I stood at the bus stand for 15 minutes, five buses passed and none of them was going to Modhera. I was thirsty and my water bottle was empty, I decided to go across the road and fill it up at a store, and then a bus crossed. I came back and asked which bus it was, "Modhera" said a guy. I felt like Wile-e Coyote, the bus being the road runner eluding me.

A few minutes later a Jeep came the driver shouted "Modhera", I asked the how much he was charging, and got in as soon as I heard the charges. I was squeezed at the back of the Jeep. The back door was faulty and was tied with a rope. I was the unofficial in-charge of making sure that the door opened and closed every time the Jeep stopped.

A couple minutes into the ride, the driver turned the music on. LOUD AUTO TUNED GUJJU MUSIC , It went on for the next 20 minutes or so. At the end of 20 minutes instead of being excited, I was relieved that Modhera was here, my ears were dead.

Modhera is a dusty little town straight out of the movies, there is absolutely no crowd, there are a few wooden houses and kothis and a bus stand. The sun temple is at the end of the town.

Unlike The famous Sun temple of Konark, this smaller sibling in Modhera is lesser known and is often ignored by tourists visiting Gujarat. The temple complex has a huge stepped water tank with geometrically carved steps and beautiful sculptures. Two more buildings exist, the main temple sanctum, unlike the Konark temple, is accessible, and then there are the mandaps. Like the other temples of that era the Exterior of the temple has sculptures describing the lifestyle and the beliefs of the people of the era. I spent an hour in the temple and then decided to move to my next stop. Patan. The site of the world heritage site Rani Ni Vav.

Patan is another 40 Kilometers from Modhera, I took an ST bus, a smooth hour long ride. I'd have to give it to Gujarat. The roads are amazing. Patan, unlike Modhera, is a bit more crowded and noisy, and dirtier. I asked around for the train to Ahmedabad, the train was in another hour. I wanted to take the train as the ST buses were too expensive and I was travelling on a strict daily budget, and this was the last train, and I had another train at night to my next Destination. Veraval.

Patan was a hurried affair. The place I wanted to visit was around 5 Kilometers away, I took an auto and asked him to take me straight to the Vav. If I'd have walked I'd have missed the train. The auto driver became my unofficial guide, telling me about every tiny building in the town, how a museum was visited by Dilip Kumar and Amitabh Bachchan and how the now famous Rani ki Vav was discovered.

The Stepwell or Vav as they call it in Gujarati is a very recent discovery. The images at the entry gate tell that when discovered it was in ruins, the sculpture was in decay with bricks, the step well was filled with rain water and filth, and was buried. By the looks of it, I could tell that Archeological Survey of India has done a tremendous job. The stepwell is now in such pristine condition that it looks like it was created only a few years ago. I roamed around and took a few photos, and came back to the auto. As per the auto driver my train was in 15 minutes, I asked him to drop me to the railway station. He charged me another 50 rupees for this, which I feel uncalled for. 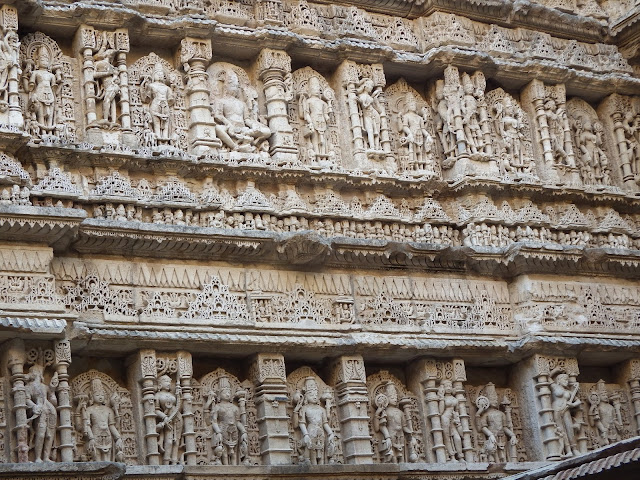 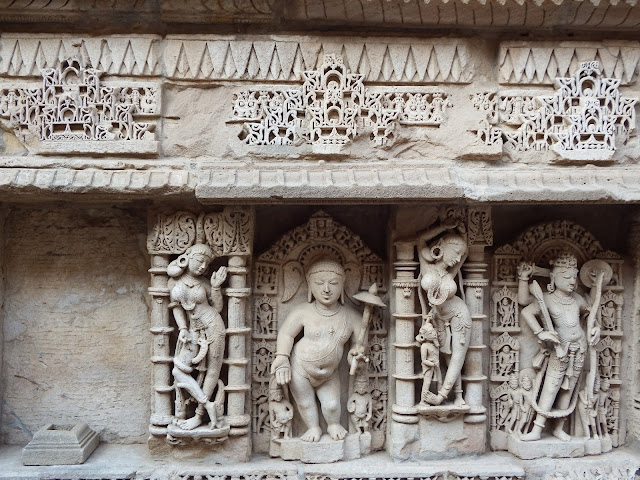 I reached the station, took a ticket and got onto the train. It wasn't a direct train to Ahmedabad, I'd have to get down at Mahesana and then take another train from there. The seats beside around me were taken by a noisy family, with most of the members being middle aged women shouting at their kids or gossipping at the top of their voice about a relative not on the train, the men were calm and silent, occasionally handling the kids, and throwing their opinion on what the women said. The 90 minutes passed soon, I was in Mahesana by 6:30.

I had bought a ticket from Patan to Ahmedabad, issue here was that my ticket was a passenger ticket , but the train in which I was getting into needed an express train. No major difference between the classes and the seats, in fact this train had older coaches and a barely working fan. The difference was just in the name and the fare. I had no time to go buy another ticket, I got into the train and took a seat.

The train had started to gather crowd. And since the coaches were smaller, it looked more crowded than it was. I was out of water and I was hungry, I asked the guy sitting near the window to hold the seat for me while I went out and bought a bottle of water, he arrogantly agreed. When I came back, I saw the guy arguing with someone who tried sitting at my seat. I was impressed by his dedication.

The impression lasted short. The guy had a habit of picking fights, I took offence at people talking a bit louder, he took offense at someone touching him accidentally, and he took offense at the train being overcrowded.
The rest of the people in the coach looked like regular passengers, there was this well dressed old man who sold chips and other snacks on the train as something for some extra income, and then there were young adults who were more interested in what movie had released and who was dating who at work. One thing common to them was that they all were tired of the angry guy.

It soon got dark, it was weird that despite the train being an express, the only light source in the compartment was a zero watt bulb, which allowed me to barely make a guess about how a person looked from the shadowy figures I could make out.

The train soon reached the outers of Ahmedabad, the angry guy got up and went to the door, shouting at everyone to give him space, he got down on one of the stops the train made before entering the platform. Everyone started talking about him as soon as he got down, speculating that the guy had no ticket, or the guy was drug addict and was scrummy because he missed a dose.

I had no ticket either, at least not the right ticket. I told this as a concern to the fellow passengers and they all told me way to get out of the platform on which the train came without getting in sight of the TTE, I had a reserved ticket to another express train so, getting of the platform would have been enoughI did get off the platform easily, I always had a feeling that TTEs could sense that you had no ticket, and everytime a man in a black suit looked at me, I was scared. Thankfully none of them asked. An adventure avoided.

I took my backpack from the cloak room, and went straight to a restaurant opposite to the end of the exit gate. As soon as I sat, a man asked me for what I wanted to have, I decided to take the Punjabi Thali, and it was out in minutes. Except the Tandoori Rotis which took a few more minutes. For 90 bucks the thali looked divine and tasted heavenly. I hadn't eaten anything all day after the breakfast at Rahul's home, probably that was a reason. Hunger often makes food look better. The food like everything Gujarati was too sweet, completely unlike a punjabi thali. I still enjoyed it.

My ticket to Veraval, the gateway to my next destination ended up in RAC. RAC seats create a bonding between people easily, you have to share a single resource in a way that none of the you is uncomfortable. Teaches a lot to you about adjustments, something which I need to learn a lot. Thankfully my co-passenger was very friendly, and well read senior citizen, We talked about my job, his job, and his life in Gujarat. It was going to be a full moon the next night and every full moon night he visited a temple in Girnaar Hill, Junagarh. ( I visited there too, but that's part of another journal). He took out a thick blanket at night, but I felt it would be too warm,I suggested that I open up my sleeping bag and use it as a blanket, he happily agreed. An hour later we dozed off.
- Ashish