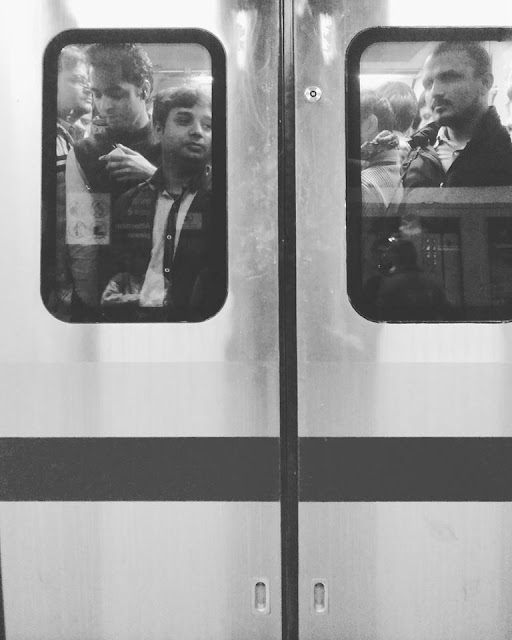 Act 1. Scene 1
Auto Driver: "Aa jao bhaiya metro jaa rahe hai"
(I am going towards the metro, have a seat)
The Passenger checks the auto sees that there is no space at the back and he and his friend aren't very keen on sitting in the front.
Another auto with an empty back seat arrives and stops in front of the auto above. The Passenger hops in.
The Auto Driver rams his auto into the other auto willingly and abuses the passenger and the other auto driver.
His response on asking why did he do so?
"Bhenchod, kamai kha gaya meri".
(Fucker stole my income)

Scene 2.
The road is blocked by the police because the cavalcade of the Prime Minister is about to pass. There is a long traffic jam for the last 20 minutes. A couple of guys get out of their cars and reach the barricade blocking the road. One of them shouts at the cop about the common people suffering because of these ministers who are made by them, everybody behind him laughs at him. The guy continues his speech. The other guy is excited at the prospect of seeing the prime minister of the country. The cops ignore both of them.

Scene 3.
One of the pilot cars in the cavalcade passes, cops ask every standing person to get a bit back of the barricade. One young guy defies the order, the cop repeatedly asks him to get back. He stands there. The cop moves towards him shouting to get back. The guy ignores. The cop slaps him, another guy comes out of the crowd and pulls the guy back. The cop later shouts at him.
" Ham bhi subah 8 baje se bina khaye piye khade hai, hamari bhi dikkat ko samjha karr"
(We've been standing here since 8 AM, we haven't eaten anything, you should understand our issues too)

Scene 4.
A young lady is standing in the crowded metro with a baby in her arms and a girl on the side. From her dusty clothes, I can tell that she is a laborer. The baby in her arms is crying at the top of his voice. He is hungry. There is no space to sit or feed the child. An elderly lady who is sitting on a senior citizen seat politely requests the young guy beside her to leave the seat for the mother. The guy smiles and stands up. The crowd helps the mother and both the kids to reach the seat. The elderly lady asks the mother to feed the crying child, the mother does. The child stops crying. A few minutes later the kid starts crying again. The elderly lady says the kid needs to sleep. She goes on to tells the mother methods to make the kid sleep. The kids fall asleep. The elderly lady starts playing with the daughter of the mother. The metro station where the mother has to get down arrives. The crowd helps the mother and the kids to get down. The elderly lady spots the guy who got up and holds the seat for him to sit and thanks him.
- Ashish